Statement of Faith and Practice
of
Living Foundation Ministries

Revelation:  The Bible, with all of its sixty-six books, was divinely revealed to man.  Therefore, it rests as the final authority for faith and practice (Rom. 10:17; 1 Thes. 4:1).  It was progressively revealed and is now complete (Heb. 1:1-2).

Inspiration:  The complete Bible is inspired of God in the sense that it was not merely an “act of man’s will” but it was God superintending these human authors using their own style and even personality.  These men composed and recorded without error God’s complete and perfect revelation to man in the words of the original autographs (II Peter 1:20-21; II Tim. 3:16).

Pre-existence of Christ:  Jesus Christ does exist eternally (Jn. 1:1).  Before the incarnation, He existed as the eternal Son of God, the second person of the Trinity and as co-equal with the Father (Heb. 1:8; Jn. 17:5).

Fall:  Having been created in innocence but with freedom of personal choice, Adam willfully and knowingly chose to disobey God’s explicit command and therefore “fell” or began a separation from God called “spiritual death.”  This condition is passed on by birth (Rom. 5:12-21).  Physical and spiritual deaths result (Rom. 6:23).

Justification:  As a sinner accepts Jesus by faith as his own personal Savior, he is at that moment justified or judicially declared to be righteous on the basis of Christ’s righteousness being imparted to him (Rom. 5:1-2; II Cor. 5:21).

Glorification:  The final step of salvation is glorification.  This occurs at the moment the believer dies and immediately finds himself in the presence of the Lord.  He is given a glory like that of Christ’s (I Cor. 15; I Jn. 3:2).

We are located 3 blocks south (second traffic signal) of I-70 & Missouri 7 Highway (exit 20) in Blue Springs, MO in the eastern Kansas City Metroplex.  See map below. Click on the map to enlarge.

Counseling services are available by appointment only, Monday through Thursday from 10:00 a.m. to 4:00 p.m., Wednesday evening until 7:00 p.m. and Fridays by special arrangement. 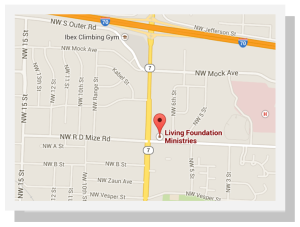